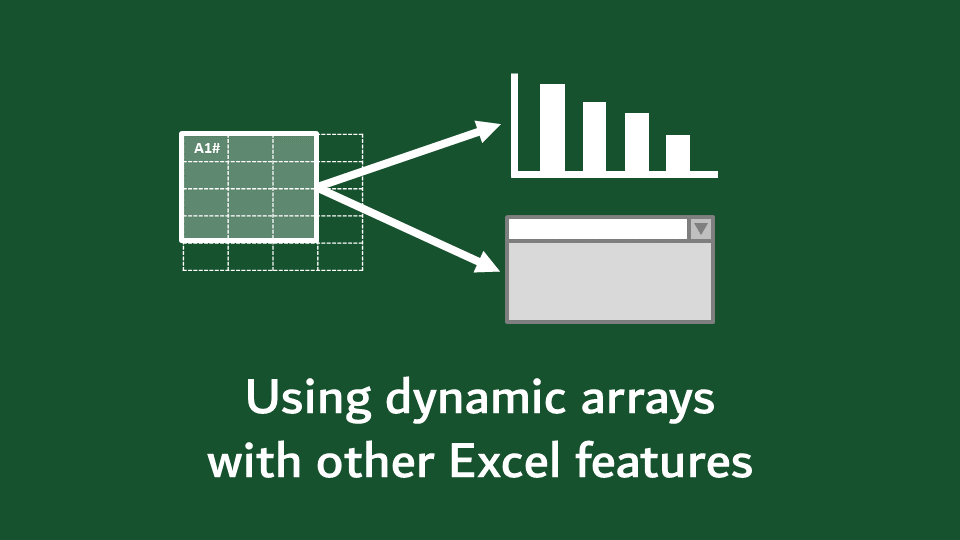 So far, in this series, we’ve looked at how dynamic arrays work and the new functions that are available to us.  Most of our examples have focused on calculations that occur on the worksheet.  But we’ve not yet considered how dynamic arrays work with other Excel features, such as charts, data validation, conditional formatting, etc.  So, we’re going to cover that in this post.

We won’t look at every Excel feature, but focus on the most common that we are likely to use dynamic arrays for.

Download the file: 0038 Dynamic arrays with other Excel features.xlsx

When thinking about dynamic arrays, it’s useful to make a clear distinction between ranges and arrays.  We often use these terms interchangeably, but they are not the same, and Excel certainly applies them differently.  If we have a clear grasp of this, it will be easier to understand how dynamic arrays behave the way they do.

Excel converts data between arrays and ranges without the user even being aware.  Let’s think about the journey our data goes through by using the SORT function as an example.  We have some source data in cells B3-C5. 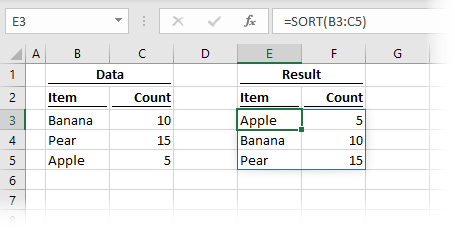 The formula in cell E3 is:

When we use the SORT function, what is actually happening:

This means that generally speaking, the following statements hold true:

Dynamic arrays have a love/hate relationship with Excel tables.

If we use Excel tables as the source for a dynamic array formula, everything works brilliantly.  If new data is added to the table, the formula updates automatically to include the new data.  That’s the love part.

However, try to do the inverse and put a dynamic array formula inside an Excel table, and we get the #SPILL! error.  That is the hate part. Arrays are about values, and tables hold values, so why is there a problem?

In the screenshot above:

A reader once commented to me that they thought named ranges were misnamed, that they should be called named formulas.  I have come to agree, as the name manager can hold a host of other things such as constants, arrays, Excel 4 macros, and formulas.

In this section, we’ll look at just two items (1) arrays and (2) spill ranges.

As the name manager can hold arrays and formulas, it is more than happy to hold dynamic array functions directly too.  The screenshot below shows a named range containing the SORT function.

We can output the named range on the face of the worksheet (as shown in the screenshot below, cell G3 and its spill range), or use it in features that accept arrays.

The name manager is also happy holding # spill references, but we need to be careful about their creation.  While named ranges can be used with absolute or relative cell references, to reference a spill range correctly, we must ensure the $ symbols are used to create an absolute reference.

Using named ranges with other features

As we go through the remainder of this post, you will see that named ranges are key to using dynamic arrays with many other features.

Even though a spill range is recognized as a range for formulas, it appears that Excel needs to perform some background processing to work out how big the range is.  The name manager can perform calculations, so it can trigger this processing.  Features that don’t contain any calculations can use named ranges as their source to handle this part for them.  We’ll look at this further in the sections below.

Charts can be a little picky about dynamic ranges already.  I believe this is because the charting engine does not try to calculate any ranges, but just wants to use the range it has been given.  This hasn’t changed with the introduction of dynamic arrays; it has always been the case.  Even before dynamic arrays, if we wanted to use formulas such as INDEX or OFFSET to create a dynamic range, we needed to place it in a named range.

The screenshots below demonstrate that using a spill range directly in a chart source will result in an error.

Instead, we need to use a named range containing a spill reference.

Charts can be created using arrays; therefore, we can also use a named range containing a dynamic array formula as the chart source.

Linked pictures are similar to charts; they don’t try to calculate anything; they just want to display the range they are given.  Therefore, using a # reference directly inside a linked picture won’t work, we’ll turn to the name manager once again.

The screenshot below shows a picture linked to a named range called NamedRange_LinkedPicture.

When the results change, so does the picture; it grows or shrinks with the size of the spill range.

For the purposes of demonstration of another technique, I’ve pulled a bit of Excel trickery in the named range used in the linked picture above.  I have joined two spill ranges together into a single named range (as shown in the screenshot below).

The formula in the name manager is:

These are two separate spill ranges, which have been combined as a single range using a colon in between.  This creates a range that goes from G3 down to the end of the spill range for H3#.

Initially, Pivot Tables appear to be happy using the # reference as a source, as shown by the screenshot below. 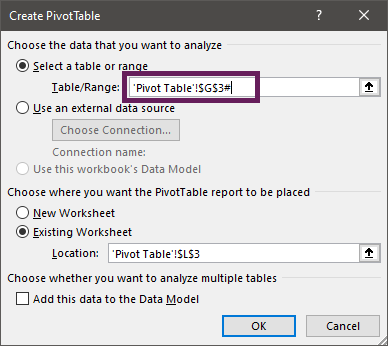 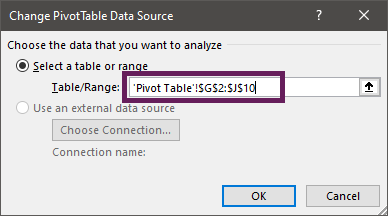 Instead, we can turn to named ranges once again.

Pivot Tables make an assumption about our data, which is that the first row is the header row.  Which gives us an issue as # references would generally exclude the header.  Instead, we can pull some more Excel trickery.

If our data is as follows: 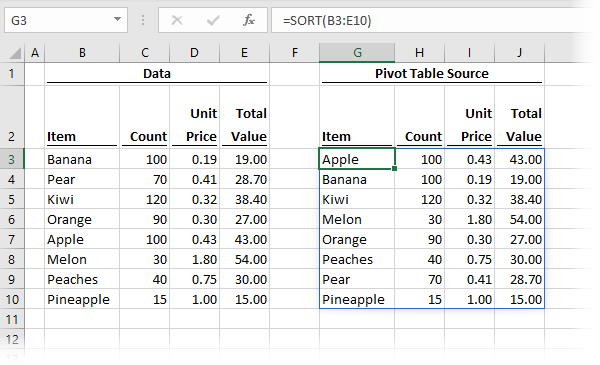 To include the header row, we can use the following formula in a named range; it creates a range from G2 to the bottom of the G3# spill range.

Here is the formula used within a named range.

We can now use the named range as the source for the Pivot Table. 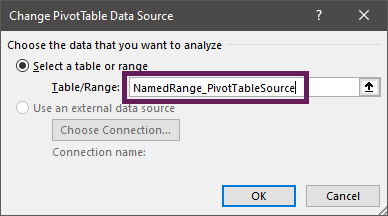 This now correctly includes the header row so that we can use it for the Pivot Table (as shown below). 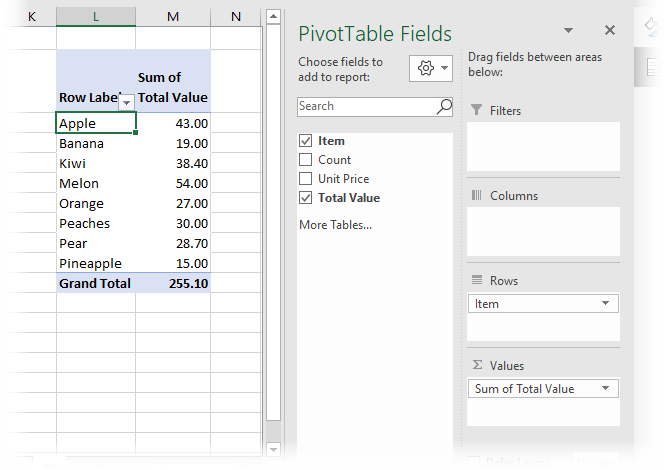 Conditional formatting is not compatible with dynamic arrays.  If you use # references inside a conditional format, Excel will convert it to a static range and it will no longer be dynamic.

The screenshot below demonstrates that when using a spill range ($B$3#), clicking Apply will convert the range to a static range ($B$3:$E$10). 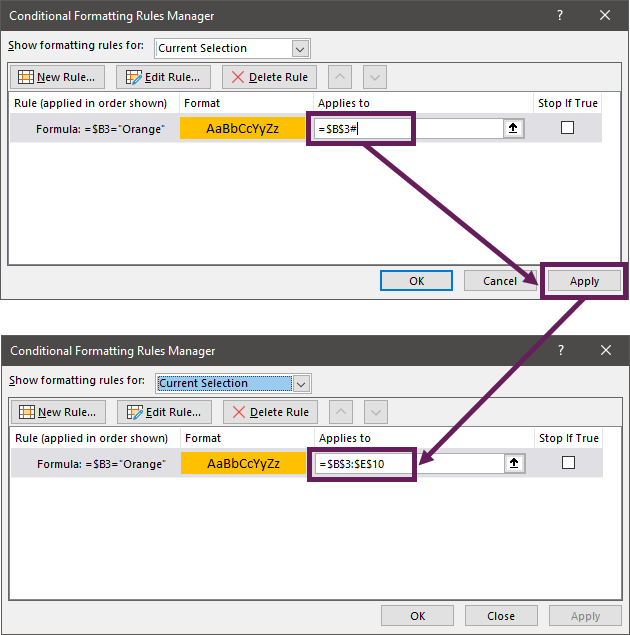 To use conditional formatting, we have to select a static range that is bigger than our likely output.  That will give the appearance of being dynamic, but may need maintenance from time to time when the spill range expands further than the conditional formatted cells.

Data validation lists perform calculations; therefore, they work exceptionally well with the # referencing system by themselves.  But they don’t use arrays, so can’t hold a dynamic array formula.

The screenshot below shows a data validation list containing the spill range starting in cell G3. 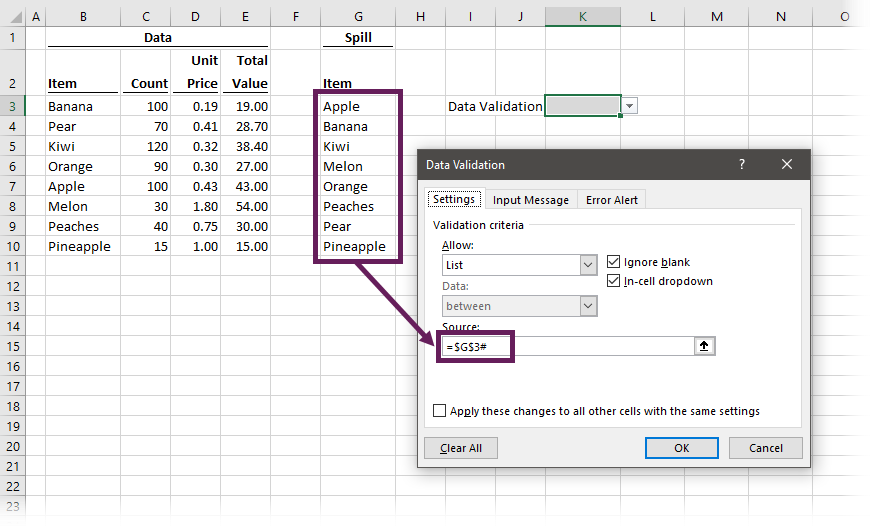 The data must still be in the right shape to work with data valuation, so it must be a single row or column.  If we want to use a named range, that will work too.

We’ve seen that many Excel features are directly compatible with dynamic arrays.  And for most features that aren’t, we can use the name manager to bridge the gap.  By looking at the general rules it has provided a good understanding of how dynamic arrays will operate when used with other Excel features.

Use the Power Query editor to update queries

8 thoughts on “Using dynamic arrays with other Excel features”