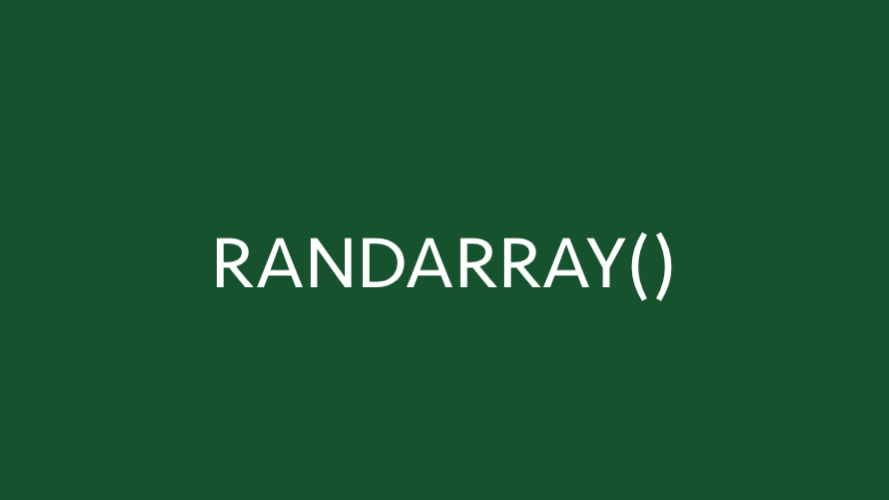 At the time of writing, the RANDARRAY function is only available to those on a Microsoft 365 subscription.  It will not be available in Excel 2019 or earlier versions.

Arguments of the RANDARRAY function

RANDARRAY has five arguments, all of which are optional.

As all the arguments are optional, we can use RANDARRAY() without any arguments to create a single random number.

One attribute to be aware of is that RANDARRAY is a volatile function. This means that it recalculates every time any cell changes.  If you’ve used the RAND function before, this functionality will not be new to you.

Examples of using the RANDARRAY function

The following examples illustrate how to use the RANDARRAY function.

In the screenshots below, we see basic examples of using the RANDARRAY function.

The formula above creates an array of random numbers which is four rows and one column in size.

The formula in cell D2 is:

The formula above creates an array of random numbers which is four rows and three columns in size.

This example shows how to turn a sorted list into a random order. 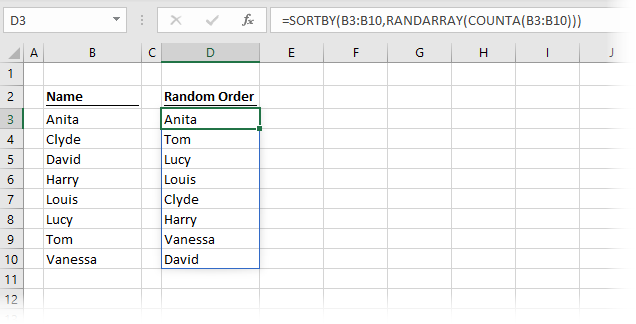 The formula in cell D3 is:

RANDARRAY(COUNTA(B3:B10)) creates a list of random numbers which is the same size as the source data.  SORTBY is then used to put cells B3-B10 into the order of the random numbers.

Example 3 – Using all the arguments of RANDARRAY

In the screenshot below, we can see all the arguments of the RANDARRAY functions.

The formula creates an array of results which is four rows, three columns, a minimum of 50, a maximum of 150, with only whole numbers.

There are two existing functions in Excel which already create random numbers: RAND and RANDBETWEEN.  We no longer need these functions, as RANDARRAY can replace both of these.

The default options applied by the RANDARRAY function provide the same result as the RAND function.

The RANDBETWEEN function selects integers between an upper and lower limit.

The formula in cell D2 is:

This demonstrates that RANDARRAY has the ability to select a minimum, maximum and return integers.  Therefore, RANDARRY provides the same result as RANDBETWEEN.