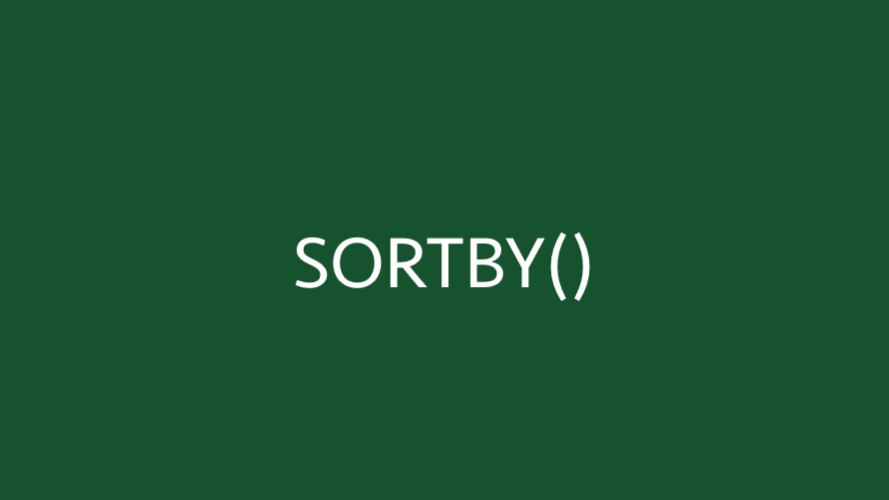 The SORTBY function was announced by Microsoft in September 2018 and is one of Excel’s new dynamic array functions.  SORTBY makes use of the changes made to the calculation engine, enabling a single formula to spill calculations into multiple cells.

At the time of writing, the SORTBY function is only available to those on a Microsoft 365 subscription.  It will not be available in Excel 2019 or earlier versions.

Arguments of the SORTBY function

Before we look at the arguments required for the SORTBY function, let’s look at a basic example to appreciate what it does.

The video below is sorting the Employees based on the Units Sold; this is what SORTBY does.  The range returned does not need to include the values that are being sorted by.  That’s pretty useful, right?

SORTBY has a variable number of arguments depending on your scenario:

If there is a third, fourth or nth sort required, these can be added just like By_array2 and sort_order2.

Only the first two arguments are necessary, which are the data and what to sort by.  If you don’t need to sort by a separate column, then the SORT function may be better suited to your requirements.

Examples of using the SORTBY function

The following examples illustrate how to use the SORTBY function.

In this example, the Employees, Units Sold and Average Price columns are returned based on the descending order of the values in the Total Value column.

Cells B3-D10 are sorted by the values in E3-E10 in descending order (as the third argument in the function is -1). The Total Value column (cells E3-E10) is not within the result, but it is still possible to use it as the sort column.

Example 2 – SORTBY expands automatically when linked to a table

This example shows how the SORTBY function responds when new data is added to an Excel table.

Cells B3-D10 are sorted first by cells C3-C10 (the Units Sold) in descending order, then by cells B3-B10 (the Employee name) in ascending order.

Example 4 – Returning columns in any order when using SORTBY

SORTBY accepts a range or array as the first argument.  It then returns the columns in the result in the same order.  But what if we want a different order, or only wish to return a few of the columns?  In this circumstance, we can use the CHOOSE function to create a range of cells in any order). 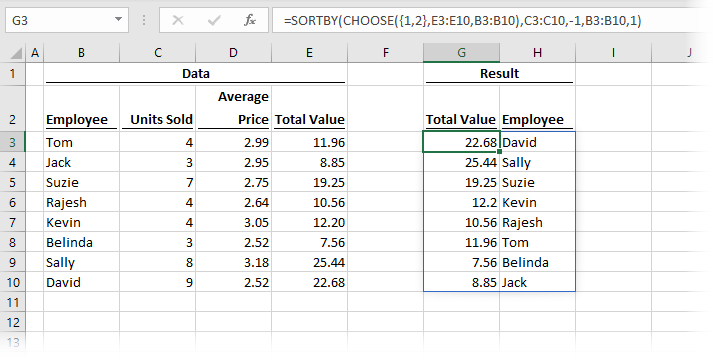 The CHOOSE function is using E3-E10 as the first range, and B3-B10 as the second range.  The {1,2} is telling the CHOOSE function which position each range should be in.  If you were to use {2,1}, the ranges would be returned in the reverse order.

Using this method, we can return columns in any order; we are not restricted by the layout of the source data.

The dynamic array functions can be nested within each other.  But this nesting can bring some challenges.  This example shows the FILTER function nested within SORTBY.

This formula is intended to sort based on cells C3-C10, then filter to only return the rows where the values in C3-C10 are greater than 5.

But did you notice in the screenshot that it doesn’t return the correct values?  This occurs because the first argument of the FILTER function uses SORTBY to sort, but the second argument is still working on the unsorted data.  When nesting these formulas, we need to apply the sort to each argument.

Now both arguments of the FILTER function are based on arrays sorted by C3-C10.

Finally, what if you only want to return a single sort position?  For example, what if we wished to only the 3rd item from the sorted list?

2 thoughts on “SORTBY function in Excel”