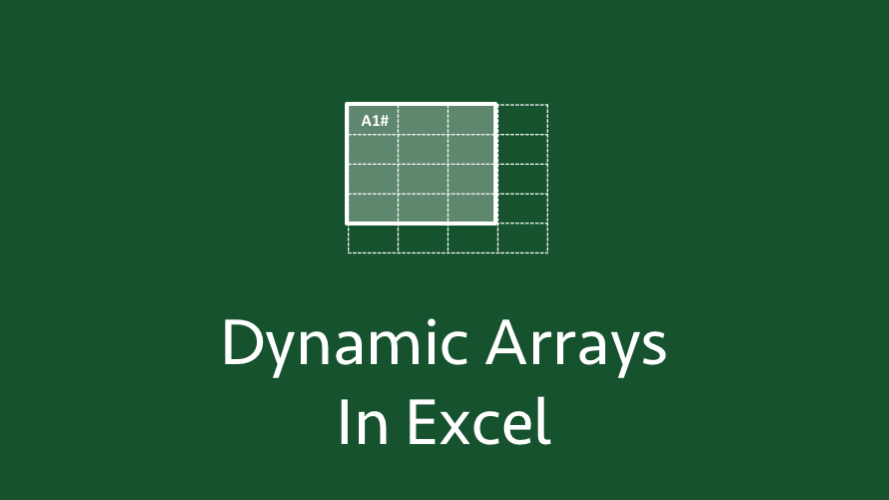 Excel has changed… like seriously, changed.  Every time we used Excel in the past, we accepted a simple operating rule; one formula one cell.  Even with advanced formulas, it was still necessary to have a cell for each.  But this has changed; Excel now allows a single formula to fill multiple cells.  This is possible because Microsoft has changed Excel’s calculation engine to allow dynamic arrays.

The term dynamic arrays sounds complicated, but once you understand it, you’ll appreciate the simplicity and power.

Let’s begin by looking at a basic example.  Here is the formula:

OK, it’s not a formula you’ve ever used, but it’s simple enough to help describe the impact of dynamic arrays.

In the old version of Excel, only one cell result could be returned.  If we provided a formula with five results (cell B2, B3, B4, B5, and B6, as per our example), then some assumptions need to be made.  As a result, there are two possible outcomes from the formula above:

Take a look at the screenshot below: 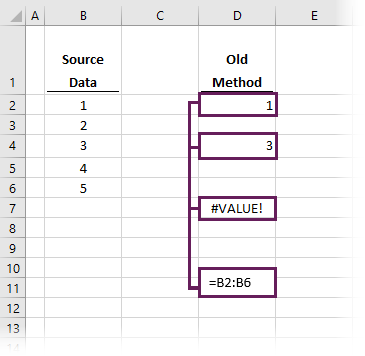 Since cell D7 is not in line with any of the source data, Excel doesn’t know what we want, and returns the #VALUE! error.  This assumption has got a technical name, implicit intersection.  But we don’t really need to worry about that anymore.

It’s interesting to think that Excel could calculate different results from the same formula (hopefully a thing of the past).  To override implicit intersection, Excel allowed us to press Ctrl+Shift+Enter when we entered formulas.  Suddenly things became very difficult to understand.  But we don’t need to worry about that anymore either.

If we have a newer, dynamic array enabled version of Excel, there is only one possible result for our example formula; Excel returns all 5 cells.  In the screenshot below, cell D2 contains the formula, but the result is shown in cells D2, D3, D4, D5 and D6.  One formula displays 5 results… amazing! 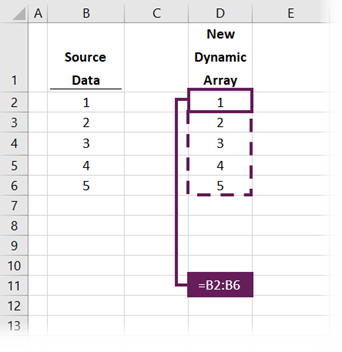 The basic rule of one formula one cell has gone.  The terminology to describe a formula filling multiple cells is “spilling”, and the range of cells filled by that formula is called the “spill range”.

Which versions of Excel have dynamic arrays?

Microsoft originally announced the change to Excel’s calculation engine in September 2018.  For over a year, it was only available to those who signed up to test early releases of the new features.  Regular subscribers on the Microsoft 365 monthly update channel started to receive the update from November 2019.  Finally, in July 2020, those on the semi-annual channel of the Microsoft 365 subscription (mostly business users) also received dynamic arrays.

Microsoft has already confirmed this new functionality will not be available in Excel 2019 or prior versions.  So, if you want it, then it’s time to upgrade to a Microsoft 365 license.

When Microsoft announced dynamic arrays, they also introduced 6 new functions.  All of which make use of this new functionality:

While we all get excited by new functions, the introduction of dynamic arrays is bigger than this; it’s a fundamental shift in how Excel (and Excel users) think about all formulas.  In the remainder of this post, I want to show you the basics needed to get started with this new way of thinking.

As noted above, there are new functions that make use of this new spilling functionality.  I won’t go into detail about each of these in this post; I have written separate posts for each of them.  The critical thing to realize is that the ability to spill is not restricted to these new functions; many existing functions now spill too.

Look at the example data below. 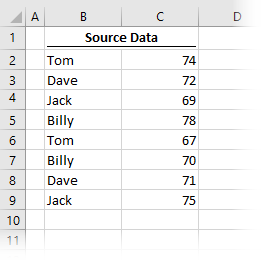 This is a simple scenario in which we have data in cells B2-C9.  This data displays a name and a score.  Let’s assume the goal is to calculate the total score for each person.

To calculate the total score for each individual, we could use the SUMIFS function.

Cells F2-F5 each contain a formula. For example, F2 contains the following:

To calculate the result for each person, this formula would be copied down into the 3 rows below.  In each formula, the last argument would change to reference cells E3, E4 and E5, respectively.

But wait, the new Excel calculation engine can return multiple results from a single formula.  Much like how our basic formula at the beginning of the post pushed results into other cells, SUMIFS works the same.

Rather than having 4 formulas, one for each cell; we can have one formula which returns results into 4 cells.  The formula in cell F2 demonstrates this:

The last argument in the SUMIFS function is the value to be matched.  Rather than one value, we have provided an array of values to match in cells E2-E5.  Therefore, Excel has performed all 4 calculations and returned the results into cells F2-F5.

So, which formulas spill, and which don’t?  Good question.  It depends on the arguments that the formula expects.

Basic aggregation functions, such as SUM, AVERAGE, MIN, MAX, etc., will not spill by themselves, which makes sense as they accept a range of values and only ever return a single value.

Generally, any function containing an argument in which a single value is expected is likely to spill.  That single value has a technical term, it’s known as a scalar.

Let’s take VLOOKUP as an example.  The first argument in VLOOKUP is the value to lookup, it’s generally a single value (it is a scalar).  If we provide two or more values in that argument, the formula will spill, and calculate the result for each item included within the lookup value.

Look at the example below.  The VLOOKUP in cell F7 is looking up Dave and Jack, so it calculates twice and returns the values in F7 and F8.

Generally, the rule is that If we’re working with standard formulas, then any time we use multiple scalars, it will spill.  We’re all getting used to this new way of thinking, so we’ll all just have to do some experimenting and see what happens. 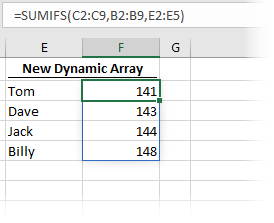 By selecting any cell within the spill range, the formula bar displays the formula driving that result.  If it is the top-left cell, we can edit the formula.  However, if we select a cell, other than the top-left, the formula is greyed out and can’t be edited.

Look at the screenshot below; we have selected the second cell in the spill range.  The formula is greyed out because it isn’t really in that cell. 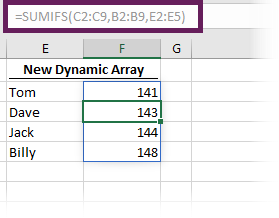 What happens if there is data already in the spill range?  Will it overwrite the existing data?  Thankfully, nothing too dramatic happens.  Instead, the top-left cell returns a #SPILL! error. 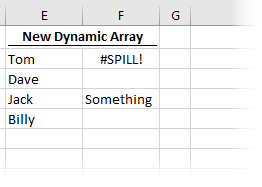 By clicking on the #SPILL! error, Excel displays the spill range, and we can see what is causing the problem. 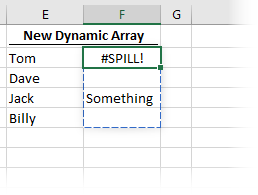 Then it’s your choice to move or delete the value or the formula.

#SPILL! errors will occur in the following situations:

As a formula can spill results into other cells, we need a way to reference all the cells in the spill range.  Thankfully, Microsoft has already thought of this and has created a new referencing methodology using the # symbol.

If the top-left cell in the spill range is in cell F2, we could reference the entire range by using F2#.

The screenshot below revisits our earlier example, but with an AVERAGE function added in cell F7.

The formula in cell F7 is:

By using F2#, we are referencing all the cells in the spill range (cells F2, F3, F4 and F5).  One significant advantage is that if the spill range changes size, the AVERAGE will automatically expand to include the increased range.

Constant arrays have always existed in Excel; however, given the introduction of dynamic arrays, the use of constant arrays is likely to increase.  They sound more complicated than they are.  So, let’s just spend a few minutes understanding how they work.

The easiest way to understand this is with an example; let’s use VLOOKUP.

This formula includes a constant array of {2,3}.  Excel is using both values of 2 and 3 and returning calculations for both into cell G3 and H3.  The old method would have required two formulas to achieve this, but with dynamic arrays we can use one.

The two numbers in curly brackets are known as a constant array.  See, they are not too scary after all.

If we want Excel to operate in the old way, we can use the @ symbol.  Let’s head back to our original example:

If we wanted to use the old implicit intersection method which only returns the values which are in the same row, we can add the @ symbol

It’s unlikely that we would ever want to revert to the old way of calculating formulas.  But initially, we are likely to see a lot of the @ symbol.

To ensure formulas built in previous versions of Excel continue to calculate the same result, the @ symbol will be added to some formulas automatically.  This means that workbooks created in old versions of Excel but opened in the new version of Excel should never spill.

I’m sure you’ve got 100 questions spinning around your mind about dynamic arrays.  There is a lot of new terminology and ways of working here.  While the changes may seem confusing initially, you will soon see that this brings new powers to Excel users, which make Excel easier to use.

Use the Power Query editor to update queries

5 thoughts on “Dynamic arrays in Excel”