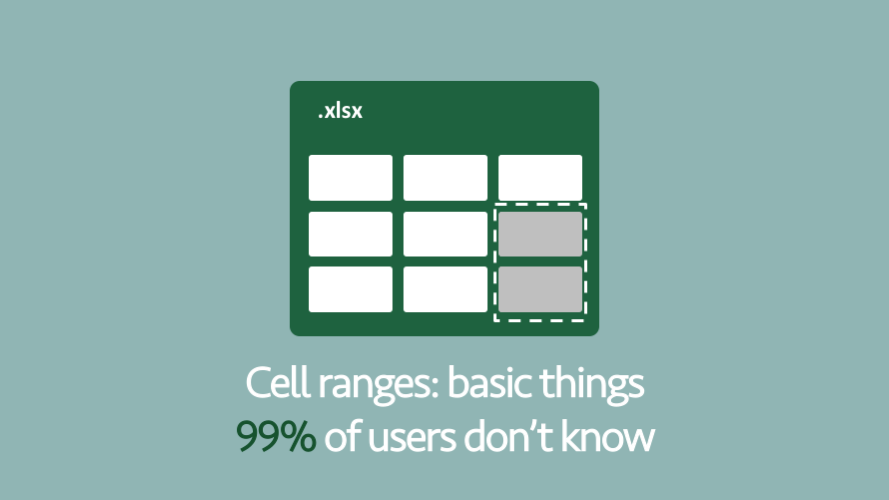 I have never been taught how to use ranges in Excel, I doubt you have either.  They are just too basic for anybody to teach, right?  Select some cells and there is a : (colon) symbol placed between the start cell and the end cell.  Maybe we could throw in a few $ (dollar signs) to fix the position of a cell reference.  It’s hardly rocket science.

We will be considering the following:

The Range Operator combines all the cells (including the cells being referenced) into a single reference.

Nothing too complex here.  But once joined with the Union operator or the Intersection operator it is ever more powerful.

The Union operator is the , (comma) symbol.  Most Excel users have used this at some point, but are not really aware that it can be combined with the Range operator.  You may have seen the Union operator it in the following situation:

From the screenshot, it appears that we are simply listing cells with a comma separating them.  We understand this concept because that’s how we list items in a sentence, but that’s not how cell references work.  We are actually combining the cells together into a single range.

The power of the Union operator really comes when combined with the Range operator.  Look at the image below, we are summing the values in the two ranges as if there were just a single range.

But there is even more power to be found when using the Union operator in a “what-if” type scenario.  Look at the image below, we are using the AVERAGE function to find the average value from the Range B2-B7.

By including Cell D4 into the formula we are answering the question, “What would the average be if the next value were 9?”.  A simple example, but very useful.

The Intersection operator is the (space) character.  Very few Excel users are aware of this feature.  Look at the example below:

The formula in Cell F3 will result in a value of 7.  The two ranges intersect (the area where the ranges cross over) at cell C5, so the value returned in in Cell F3 is equal to Cell C5.

When applying this to named ranges we can create a simple lookup formula without the need of any functions.

Going even further, we can sum the Intersection ranges together.  In the screenshot below the value returned in Cell F2 would be 11 (8+3).

It is also possible to use the Intersection operator with the Range operator, look at the following example:

INDIRECT takes a text string and converts it into a range.  For example:

The formula above would take the value in Cell F3 as being the row number.  So, if Cell F3 contained a 5, the Cell Reference would be A5.

INDIRECT is a volatile function, so should be used with care.

The OFFSET function can have up to 5 arguments.

It might be easier to understand with an example.  Look at the formula in Cell F3.

The OFFSET starts with the Reference Cell (Cell D5), moves -3 rows (up to Cell D2), then -2 columns (across to Cell B2).  The last two arguments calculate the size of the new range.  So, starting at Cell B2, the height is 2 and the width is 4.  Therefore, the final range is B2:E3.

OFFSET is a volatile function, so should be used with care.

INDEX is similar to the first 3 arguments of the OFFSET function.  The key differences being (1) the first argument must be the range of cells which includes the result cell (2) due to the nature of the function, the counting starts at 1 (e.g. INDEX(A1:C3,1,1) is the same cell reference as OFFSET(A1,0,0)

It is now possible to use INDEX in unique ways.  Look at the screenshot below.

Does the formula in Cell F2 make any sense to you?

Looking first at the INDEX function. In the Range D2-E7 take the 4th row and 2nd column, the result of which is E5.  Therefore, the formula becomes:

INDEX is not a volatile function, and therefore should be used ahead of OFFSET and INDIRECT where possible.

The CHOOSE function can be used to select different cell ranges based on an index number.  Here is an example:

The first argument of the CHOOSE function is the index number.  The following arguments are a list of possible results.  Using the example above, the first item in the list is B2:B7, the second is C2:C7, the third is D2:D7 and so on.

As the index number provided in the example above is 2, the result of the CHOOSE function will be the 2nd item in the list – Cells C2:C7.  (Remember, it will be the third argument, as the first argument in the function is not part of the list).

The formula above becomes:

The SWITCH function (Excel 2016 onwards) operates in a similar way to CHOOSE.  However, rather than selecting an item based on an index it will return a result based on a matched value.

Using the example above, if the value in Cell F2 is “East”, the Cells D2:D7 will be returned by the SWITCH function.  The formula above becomes:

You’re now an Excel Range ninja.  You’ve got all the tools you need to create some very powerful (yet simple) Excel models.  The only limit now, is your creativity.