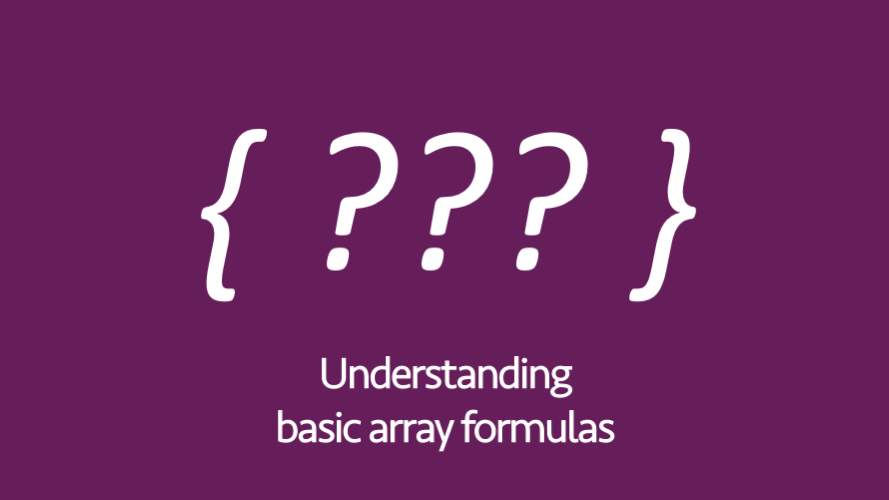 Have you heard of the mysterious “array formulas”?  Do you use them?  Or are you like most Excel users, you’ve placed them in the “too hard” pile, never to be seen again.  They always seem to crop up in forums as solutions to some tricky formula questions.

In this post, I want to introduce to you one type of array formula which is actually pretty easy to understand and can be applied to lots real-life situations.  Once you’ve grasped the concept of this type of array formula, you’ll be able to apply it over and over again.  Your work colleagues will look at you like you’re an Excel genius, they will be mesmerized by the apparently impossible calculation you’ve just performed . . . but secretly you’ll know it wasn’t that difficult.

An array formula is a calculation which works with an array or series of data.  Don’t worry if that concept blows your mind at the moment, by the end of this post it’ll hopefully make sense.

You must press Ctrl + Shift + Enter, not just when creating the formula the first time, but anytime you edit the formula.

In the examples below I will show the { } curly brackets, but remember, don’t type these, Excel will display these by itself.

For our example, we will be looking at the type of array formula which returns the result into a single cell.

Look at the table of data below, it shows the quarterly sales for 3 departments of a clothing store.  If we wanted to know the annual total for any department we could use the SUMIF function. 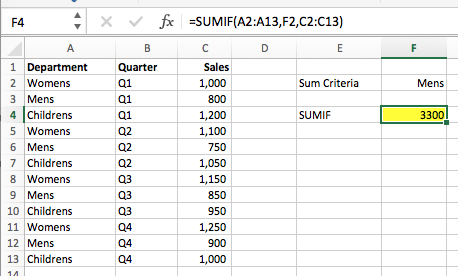 The value in Cell F4 is calculating the total sales for the Men’s clothing department:

Let’s break down the SUMIF function down into its two parts SUM and IF.  Logic requires that the IF function must be calculated first, then the SUM function can be used to calculate the total.  This is what we will do.

The first step to convert SUMIF into an array formula is to create an IF function for a single row.

The second step is to expand the range to include all the cells required for the calculation (this is what makes this an array formula, as it calculates based on an array of cells).

The third step is to include the SUM function around the IF function.

The final step is to press Ctrl + Shift + Enter to enter the formula (notice that Excel displays the { } by itself). 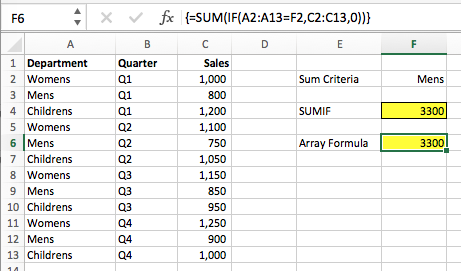 The formula in Cell F6 is:

You have just created an array formula.  That wasn’t so hard, was it.

The orange section in the formula above is will calculate as shown below.

Each of these formula results is calculated as a separate IF function.

The first IF function has calculated as FALSE, therefore the result will be zero (it would have been 1000, if it were TRUE)

The second IF function has calculated as TRUE, therefore the result will be 800 (it would have been zero if it were FALSE)

This continues for each result of the IF function.  This calculates down to provide the following result.

This is now a straightforward SUM function, which will add the numbers together.  The result is 3,300 (which is exactly the same as SUMIF).

This concept works for a variety of situations.  Now that you know the concept, you could create your own complex formulas, which would be impossible with a normal function.

You could create a SUMIFBUTFIXEDVALUEIFNOT (Sum if, but fixed value if not) function:

Array formulas may sound great, but there are some issues to be aware of:

Other examples of array formulas

Here are some posts from the blog which include other examples of array formulas.