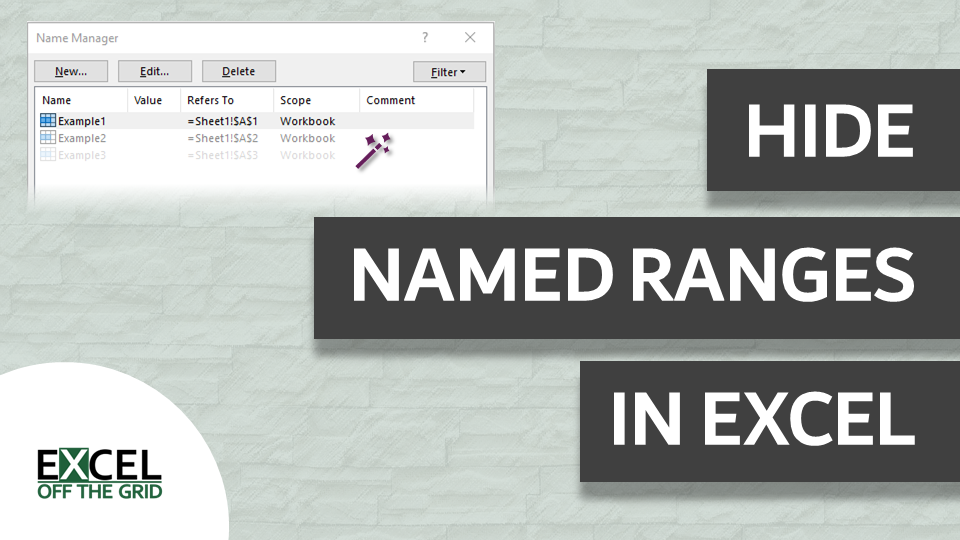 Named ranges are a useful feature of Excel. We often use them to build more complex tools that we may share with other users. Therefore, those named ranges become a critical part of our spreadsheet. Unfortunately, if those users modify or delete the named ranges, it may break the calculations. So, in this post, I want to share 4 ways that you can hide named ranges (and of course, how to unhide them again).

When we create named ranges, they are found in three places in the user interface

To prevent users from seeing formulas we can:

No formulas will appear in the formula bar if that cell is selected.

In the remainder of this post, we look at methods to further hide named ranges, as we don’t want them visible in either Name Box or Name Manager.

The user interface does not provide any tools to help us with this; therefore, we need to look at other more advanced methods.

Let’s start by looking at VBA macros. Below are 5 code examples for hiding, listing, and unhiding named ranges. Please note, these will only work on Excel desktop.

The example below hides an individual named range called Example1 from the active workbook.

The code below loops through every named range in the active workbook and hides all of them.

Having hidden named ranges, we may then want to know what those names are so we can use them or unhide them. The following code lists all the hidden named ranges in the active workbook. The list starts on cell A1 of the active sheet. Macros cannot be undone, so start a new worksheet to avoid overwriting anything you want to keep.

If you see items in the list that you were not expecting, check out the Unknown named ranges section at the bottom of this post.

After you’ve hidden some named ranges, the next question is: how do you unhide them again? The code below unhides a named range called Example1.

The example below unhides all named ranges from the active workbook.

If you want to know more about using named ranges with VBA check out our guide: VBA Named Ranges – Common Properties & Methods

Now let’s move on to Office Scripts. These will work in Excel online, and hopefully, be fully working on desktop soon. At the time of writing, there is partial support for Office Scripts in Excel Desktop.

The codes below mirror those in the VBA macro section above.

The example below hides a named range called Example1 from the Active Workbook.

The code below hides all the named ranges in a workbook.

The example code below lists the hidden named ranges in a workbook. The list starts on Cell A1 of the active sheet, so make sure it won’t overwrite anything important before you run the script.

If you see items with strange names you were not expecting, check out the Unknown named ranges section below.

The code below unhides a named range called Example1.

The code below unhides all named ranges in the workbook.

You are unlikely to use this final method often. However, you never know; it might be helpful at some point. To hide named ranges using this method, we unpack the Excel workbook file structure and change the source code.

Be aware, this method may corrupt your file if it goes wrong. Please backup for attempting this method.

Most users are not aware that Excel files are zipped folders. If this is new to you, you might find this interesting.

The examples above all use workbook scoped named ranges. However, named ranges can also be worksheet scoped. For these, the method of referencing the name changes to include the sheet name.

While the following references a named range scoped to Sheet1

The underlined section identifies the sheet to which the named range relates.

When you list or unhide all named ranges, you may be surprised to find items you did not create. These are items that Excel creates in the background for its own usage.

For example, if you have a filter applied, the named range might appear as ‘Sheet1’!_FilterDatabase

Or, if you have a dynamic array function in the workbook, the named range might appear as _xlfn._xlws.SORT

Do not delete any of these, they are how Excel controls other parts of the workbook.

As we have seen, to fully hide named ranges, we need a 2 step approach:

After applying these two steps, users will now see the named ranges. The names will exist but not be visible in the Name Box, Name Manager any formulas.