VBA allows us access to the windows environment to rename a file. In this post, we will look at 5 examples of renaming files with VBA.

To rename a file with VBA we use the Name command.

Example 2: Rename a file based on cell values

We can run the following macro to rename a file using these cell values.

Example 3: Move a file with the Name command

Did you notice the Name command requires the file path and file name? Therefore, this command doesn’t just rename but can also move files. For example, the code below will move the file from C:\Users\marks\Documents\ to C:\Users\marks\, but the file name remains the same.

Moving files can trigger errors; these are detailed in the section below. To avoid going through the Visual Basic error debugging process, we can display a message box with an OK button.

We can use this function in two ways.

Let’s look at both of these in turn.

Calling the function from a macro

The macro below calls the function and displays a message box

Calling the function from a worksheet

Alternatively, we can call the function just like a normal worksheet function.

Look at the screenshot above, our custom function is used in Cell C6:

Be aware the function executes each time cells C2 or C4 change, so be careful with the order in which you update the cells.

If we try to rename a file or folder path that does not exist, it triggers an error: Run-time error’53’: File not found. 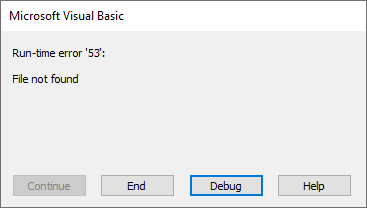 If the new file name is the same as an existing one, it triggers the following error: Run-time error ’58’: File already exists. 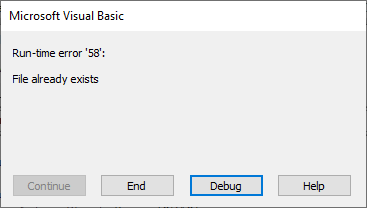 We have used Excel workbooks in the examples, but we can use any file type. Also, we are not restricted to files; we can also rename folders using the Name command.

The Name command is core Visual Basic code. Therefore, it exists in other applications supporting VBA, such as Word and PowerPoint.

Also, check out our VBA code library for hundreds of reusable code snippets.