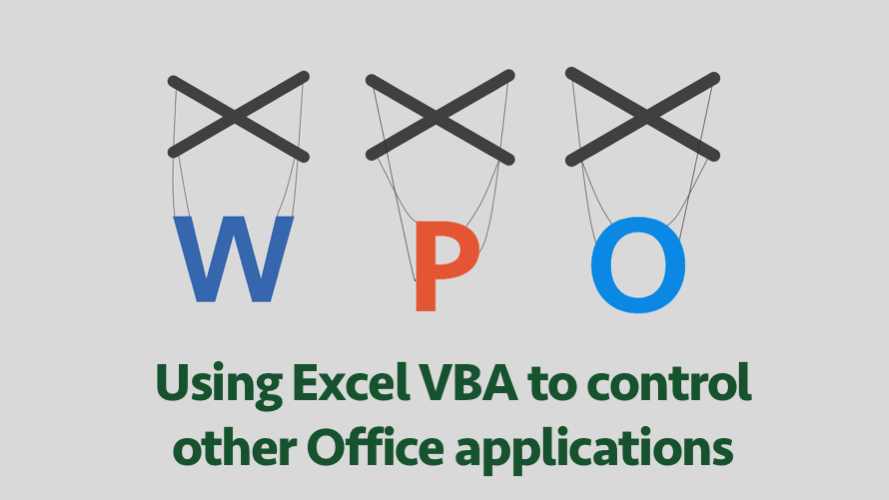 Whilst this site is primarily about using Excel, there are times when Excel is not the best tool for the job.  Each Office application is designed for different tasks.  Tables and charts may be easily prepared in Excel, but they are often exported to PowerPoint, Word or Outlook for the purposes of presentation and distribution.  Whilst these are all different applications they all incorporate the VBA programming language.  This means that VBA in Excel can be used to control these other applications, and these other applications can also be used to control Excel.

This series of posts is all about how we can use VBA control other Office applications.

To be able to control other applications, Excel needs to know how to refer to the different objects within that application.  Excel doesn’t know this automatically, so we have to tell it to use the application’s object library.  For example, if we wanted Excel to create a new slide in a PowerPoint presentation, we first need to tell Excel to use the PowerPoint Object library.  This is process is known as binding.  Once Excel knows the PowerPoint Object Library, it is able to control PowerPoint through PowerPoint’s Object Model.  This is not just limited to PowerPoint; Word, Outlook, Adobe Acrobat and many other applications have Object Libraries, all of which Excel can use to speak their language.

When creating this link between Excel and the other application, there are two binding options (1) early binding (2) late binding.  This is what we will be considering for the rest of this post.

Select the reference for the application and click OK. 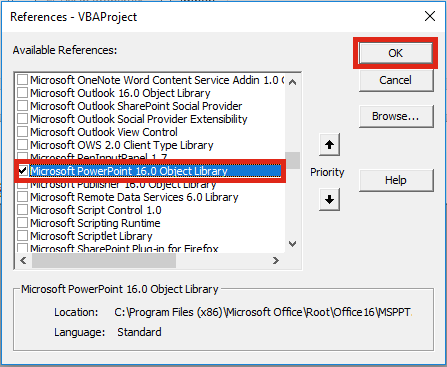 If the reference to the Object Library has not been created the following error message will appear. 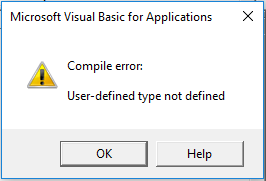 When using Late Binding, it is not necessary to create a reference to the Object Library in advance.  By creating an object in VBA we can bind to the necessary Object Library at the time the code runs.

This example code will open a new PowerPoint Presentation and write text onto the first slide.  This example users Late Binding

Advantages & Disadvantages of each type of Binding

It is not possible to pick one binding method and stick to it for the rest of your VBA career.  Each type of Binding has certain advantages, which make it better than the other in certain circumstances.  As there are only two options the advantages of one are generally the disadvantages of the other.

Generally, the code runs slower and requires more processing power.  Excel does not know about the Object Library of the other application, so it does not bind until the code is executed.

It is harder to write the code in the VB Editor as it will not include the Intellisense options. (Intellisense is the name for the list of methods and properties which pop up in VB Editor when writing VBA code).

The VBA names for options and settings are not available.  For example, in PowerPoint VBA it is possible to paste as a Bitmap image using code ppPasteBitmap, however with Late Binding you must use the enumeration number, which is 1.  As a result, the code is less readable.

Which binding method should you choose?

For me, the answer depends on whether I can guarantee which version of Object Library is available.  For example, where the macro will only be run on a single PC, or where there is consistent IT infrastructure and software, then Early Binding is a good option.  However, if the code is to be distributed and used on unknown IT software and infrastructure then Late Binding is the best option.

You need to be able to use both options to select the right version for your circumstances.

2 thoughts on “Using VBA to control other Office applications”