Before I start, let me share a little secret with you… I really dislike VBA arrays.  There just seem to be too many oddities in how they work.  Compared with other programming languages, VBA seems to make arrays overly complicated.  If you feel the same, then you’re in the right place.  This post contains a lot of code examples, which will cover most of your use cases.

Thank you to Jon Peltier for suggesting how I can improve this post.

What is an array & when to use it?

An array is a list of variables of the same type.  For example, a list of supplier names would be an array.

Let’s assume we have a list of 5 suppliers that can change each month.  Look at the screenshot below as an example: 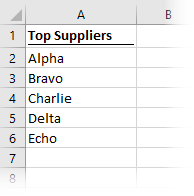 To hold the supplier list, we could create 5 variables, then assign values from a worksheet to each variable.  This is what the code might look like:

Also, what if we have an unknown number of suppliers.  What are we going to do then?  We would need create more variables than we need just to ensure there is enough space.  Again we can turn to a VBA array.

Look at the code below; it creates an array to hold 10,000 suppliers, populated from 10,000 cells in column A. You don’t need to understand it at this stage; instead, just be impressed with how neat and tidy it is. It’s difficult to believe that a VBA array containing a list of 10,000 items takes less code than a list of five variables.

But, it doesn’t end there.  If the values to assign are in a contiguous range, we can reduce the code to just a few lines.  Look at the macro below; a range of 10,000 cells is assigned to a Variant variable type, which automatically creates an array of 10,000 items (no looping required).  Amazing stuff, right?

OK, now we understand the benefits of VBA arrays, let’s learn how to use them.

The difference between the two is how they are created. After that, accessing values, looping through elements and other actions are exactly the same.

Declaring an array as a variable

Arrays are declared in the same way as single value variables.  The critical difference is that when declaring an array parentheses are often used after the variable name.

Arrays, like other variables can be any variable type.  Integers, strings, objects and ranges, etc., can all be included in an array.

Using variant as an array

A variable declared as a Variant can hold any data type.  Interestingly, a Variant type can also become an array if we assign an array to it.

Look at the code below.  First, a standard variable with a Variant data type is created, then an array is assigned to the variable.  As a result, the variable has become an array, and can be treated the same as other arrays.

By default, arrays have base 0, which means they start counting at 0, rather than 1.  The following macro creates a static array with 6 elements (0, 1, 2, 3, 4, 5).  Notice that the array is created with 5 inside the parentheses, but because of base 0, there are actually 6 elements created.

We can turn arrays into base 1 (i.e., counting starts at 1) by inserting the following code at the top of the code module.

Arrays can contain multiple dimensions (or sub-arrays).  This is much like having data in rows and column.  In the code below, we have created a static array of 3 elements, each of which is its own array containing another 3 elements.

We’re not limited to just two dimensions, VBA allows us up to 60!  I don’t think I’ve very used more than 3, but it’s good to know that there are so many spare.

The problem with static arrays is that we need to know how many elements are required when we create the array.  But often we don’t know the number of elements, or maybe we want to add and remove elements from the array as we go.  Instead, we can turn to dynamic arrays.

NOTE – The term “dynamic array” in Excel and VBA is not the same; they are entirely different methodologies.

The following macro initially creates a dynamic array with no size.  Then, later in the macro, the array is resized, using ReDim, to create 5 elements, starting at 1.

A dynamic array can be resized many times during macro execution (we will see this later in this post).

Each element of an array has an index number (i.e., the position in the array).

Index of the first element

The following macro displays the index number of the first element in an array.

LBound() is a function which returns the lowest item in the array.

Index of the last element

The following macro displays the index number of the last element in an array.

UBound() is a function which returns the highest item in the array.

Assigning values to an array

After creating an array, whether dynamic or static, we need a way to assign values to the individual elements.

The following macro creates a static array, then assigns values to each element individually.

The following macro demonstrates how to assign values to a dynamic array based on a list of values.

The Array() command is a short way to add values to an array.

Assign values to elements with a string

The following macro splits a string into an array.

Assign values to elements from a range

The following macro creates a 2-dimensional array directly from a range.

Convert arrays to string and ranges

Having got an array, we can then convert it into either a string or display the values in a range.

The following code creates an array, then uses the Join function to convert it into a string.

A 2-dimensional array can be written to the cells in a worksheet in either a horizontal or vertical direction.

Looping through each element in an array

There are two ways to loop through the elements of an array:

NOTE – The For Each loop can only read the elements in an array; it cannot be used to change the values assigned to elements.

The following example creates a single dimension array, then loops through each element in the array.

A For loop can also be used for multi-dimension arrays, as shown in the code below.

For Each loop: single-dimension array

The For Each loop works on a single or multi-dimension array.  However, it can only read data from an array, it cannot assign values to an array.

For Each loop: multi-dimension array

The example below is to illustrate that the For Each loop is identical for both single and multi-dimension arrays.

Check if a value is in an array

We often need to search an array to discover if an item exists.  The following is a reusable function for searching through an array for a specific value.

The result of the function can be:

The function takes two arguments (1) the array and (2) the value to find.

The following is an example of how to call the function above; it tells the function to search for the string “Bravo” within the array.  The result returned is True if found, or False if not.

Find the index of an element in an array

In the previous sections we returned True of False depending on if an item exists.  But often that is not enough, we want to know where it is in the array.  The following is a reusable function which finds a value in an array, then returns the index position:

The result of the function can be:

The function takes two arguments the value to find and the array to search.

The following shows how to use the function above; if the string “Bravo” is found within the array, it will return the index position, or False if not found.

As we’ve seen above, dynamic arrays are declared without a size.  Then later in the code, ReDim is used to size the array.  ReDim can be used many times during the macro to resize a dynamic array.

Static arrays cannot be resized, trying to do so, leads to an error. 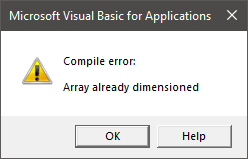 When resizing an array with ReDim, the assigned values will be cleared out. To keep the existing values we must use the ReDim Preserve command.

The macro below creates, then resizes an array.  After that, the code loops through the array to demonstrate that folowing a ReDim the the values are cleared.

The following function sorts an array alphabetically.  The function takes a single argument, the array to be sorted.

The following is an example of how to use the function above.

The code below is an example of how to use the function above.

Along with LBound, UBound, Split and Join, another useful built-in function is Filter.

The Filter function has 4 arguments:

Hopefully, this post covers most of your needs.  However, VBA arrays are a vast topic, so make use of online forums to ask specific questions which this post doesn’t answer.