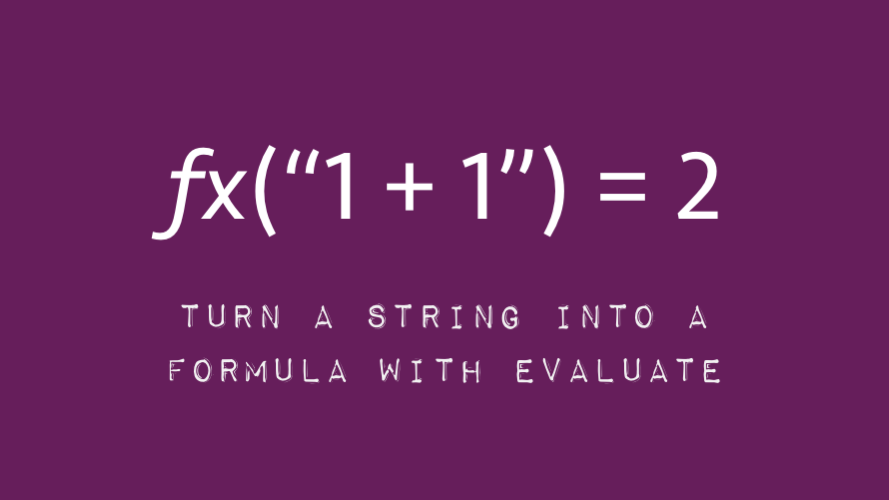 I encountered a situation recently where I needed to convert a text string into a formula for calculation.  I was expecting to find Excel would have the ability to do this.  And it does . . . in part.

If you have a number stored as text you can multiply it by 1 and it will be converted to a number.  But what if we want to convert a whole text string into a formula, rather than just converting a single number?  How can we achieve this?  Excel has the EVALUATE formula, however, this is a legacy formula which does not quite function how you might Expect.  So, let’s see how we can solve this.

Using EVALUATE to convert string to a formula

Let’s use an easy example of how the EVALUATE function might convert a string into a formula.

In our worksheet we have data in 3 cells

If we wanted to use this information to create the formula 1+1 (which equals 2), how could we do it?  The EVALUATE formula would be the perfect option, except it only partially exists.  If we were to include a formula such as:

Note: The & is used to combine cells together into a single string, so our example would become:

However, we can create that same formula as a named range.

Enter the formula in the Refers To box and click OK. 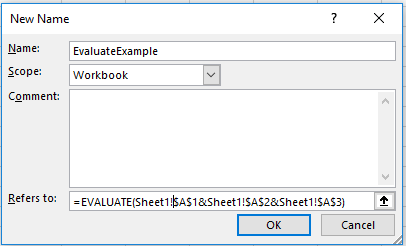 That named range is now available for use in formulas.

The result in Cell C1 will become: 2

This might be useful to a certain extent, but in most circumstances it does not provide a suitable solution for converting a text string to a formula.  We need something which gives the same result, but which can be used as a normal Excel formula.

EVALUATE as a User Defined Function to convert string to formula

It is possible to create our own Excel functions with VBA; these are known as a User Defined Functions (UDF).  These work the same way as Excel’s standard functions, but we determine how the result should be calculated.

If we insert the following VBA code into a Module of the Visual Basic Editor we can create our own EVALUATE formula.

That’s it.  Just 4 lines.  Even though Excel does not have the EVALUATE function itself, VBA still does.

We are now able to use this as if it were a normal function.

The result in Cell C1 will become: 2

There is no need to create a named range each time, and this formula is now available for use in our workbook.

Note: If the code is not placed in a Module it will not work.

To convert a text string to a formula it appears the VBA User Defined Function route is the best option.  Whilst it is possible to use a named range, it is restricted by what it can achieve.

6 thoughts on “Turn a string into a formula with Evaluate”