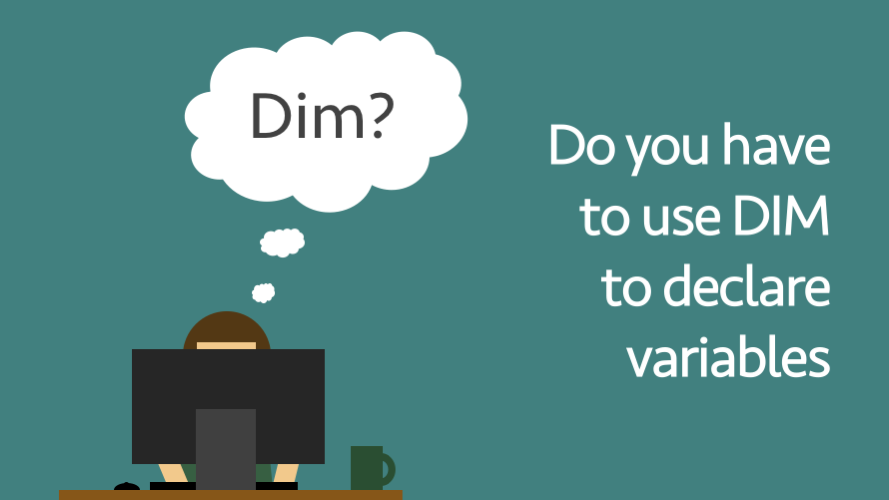 When looking at other people’s VBA code in books or on the internet we often see the Dim statement being used to declare variables.  It is possible to write valid VBA code without declaring variables, so why bother?

The default settings for variables

When variables are declared, they can be given a type.  Types include Integers, Strings, Worksheets and many others.  Here is an example of a variable declared as an Integer:

But it is possible to declare a variable without a type:

If we don’t define a variable type then what is it?  Any variable, declared and undeclared, which does not have a type is automatically created as a Variant type.

Sounds amazing, right – a variable which changes to be whatever we need it to be.  So why don’t we just use the Variant variable type all the time?  The biggest reasons not to use the Variant type are:

An undeclared variable can only be a Variant type, so to be able to set the variable type, the variable must be declared.

Declaring variables enables us to avoid the issues caused by the Variant variable type.  But, there are other advantages too:

Reducing typing errors.
My typing accuracy is not 100%.  How accurate is yours?  If we call a variable loopCounter the first time we use it, but call it lpppCounter the second time there will be an error when we run the code.  Which is good, because we really do not want two variables.

Easier for others to follow your code.
Anybody looking at your code has more chance of understanding it if the variables are declared (and also commented).

Force variables to be declared

By inserting the text Option Explicit at the top of the VBA code it will ensue than any undeclared variables are shown as errors.  We can set-up the Visual Basic Editor to automatically create the Option Explicit text for us. 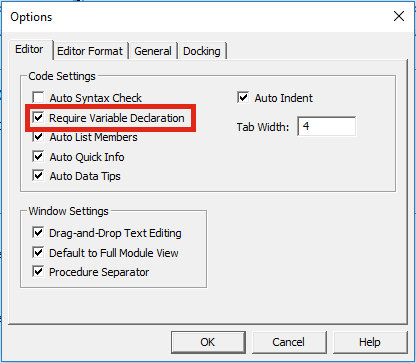 Reasons to not declare variables

If you watch the Excel TV interview with Bill Jelen at about 25 minutes he gives his reasons for not needing to declare variables.  I’ve summarised them below:

Should you declare variables?

Personally, I think the advantages of declaring variables are too strong.  I am a human being, I make mistakes, therefore I appreciate any help in finding errors in my code.  So, I would say, ‘Yes’ you should declare variables.